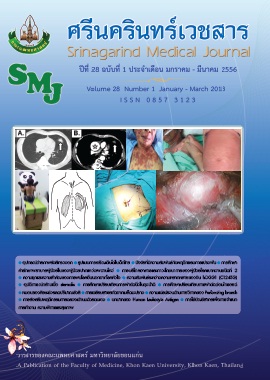 Background and Objective: Small for gestational age (SGA) infants are at risk of short stature, poor academic performance and behavioral problems. The majority of SGA infants catch-up growth within two years but the pattern of growth differs in different ethnics. The objective of this study was to determine the pattern of growth in Thai SGA infants at Her Royal Highness Princess Maha Chakri Sirindhorn Medical Center (HRH MSMC).

Methods: All subjects were born at HRH MSMC between 2000 and 2009 who were termed SGA infants were included in the study. SGA was defined as birth weight below the 10th percentile of gender-specific standard growth curve and catch-up growth was defined as weight for age achieves the 10th percentile. Time to catch-up growth of SGA infants is presented as Kaplan-Meier survival estimates. The change of weight for length Z score between age group predicted overweight and obesity (Z score > 1SD) at 25 – 36 months of age with receiver operating characteristic (ROC) curve.

Conclusions: Within two years, 80% of term asymmetrical SGA infants at HRH MSMC caught up normal growth and 70% of them caught-up within one year. Weight for length changed from 7 – 12 months to 13 – 18 months and from 13 – 18 months to 19 – 24 months were clinically significant to predict overweight and obesity at 25 – 36 months of age.