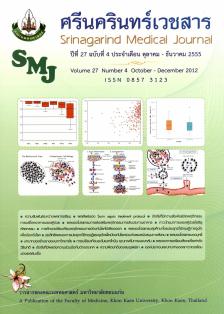 Background and Objective : Malnutrition caused complication of diseases and affect a patients’ treatment. Udonthani Hospital has developed a nutrition triage (UNT) to screen and evaluate the nutritional status of patients. The objective of this study was to investigate the relationship between nutritional status according to the UNT and the length of hospital stay in the surgical intensive care unit (ICU).

Methods : This research was a descriptive study. The UNT was used to assess the nutritional status of 201 patients who admitted in the surgical ICU for more than seven days. In addition, data on the length of stay in the ICU were collected for cerebrovascular disease patients, who were admitted to the ICU before and after the hospital began using the UNT; there were 86 patients in each group. The data needed for the assessment of nutritional status using the UNT was obtained from the hospital record charts. The relationship between UNT scores and length of stay in the ICU was analysed using Pearson’s product-moment correlation coefficient. Student’s paired sample t-test was used to compare the differences in nutritional status between on the admission and discharge, and the Wilcoxon rank sum test was used to compare differences in the lengths of stay between the cerebrovascular disease patient group who were admitted before the hospital started applying the UNT and a same diagnostic the group admitted after the hospital began using it.

Results: Most of the 201 surgical ICU patients were males (58.2 %), and their average age were 51 18.5 years old. The reasons for admission to the unit included multiple injuries due to a traffic accident (24.4%) and cerebrovascular disease (17.9%).A large majority (92%) required surgery and 27.4% had developed an infection.The reduction in total malnutrition scores on the UNT between admission and discharge was statistically significantly (p < 0.0001).The total malnutrition score on the UNT was significantly and positively correlated with the length of stay in ICU (p < 0.05).The average length of stay for the cerebrovascular disease patients group admitted before the hospital began using the UNT (9.8 days) was higher than after its introduction, but the difference was not statistically significant.

Conclusion: Malnutrition appears to prolong the length of stay in a surgical ICU, but it does decline between admission and discharge.