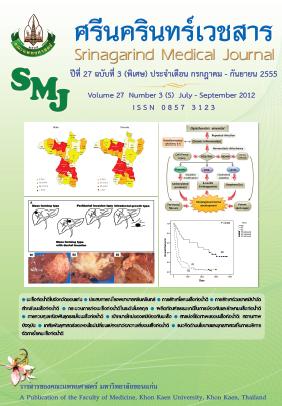 Background and objective : In the year 2010, there are outbreaks of Hand, foot and mouth disease (HFMD) in  Khon Kaen, especially in Khon Kaen municipality.  HFMD outbreaks were usually found in child care centers and kindergarten schools (CCCKS), where the caregiver is very important in prevention and control of the disease.This study aims too determine the proportion of caregivers in the CCCKS who had knowledge regarding the screening , the prevention of HFMD  and to study their practices during the outbreaks in the CCCKS.

Methods : This study is  a descriptive study in the  CCCKS in Khon Kaen municipality.Population are child caregivers in CCCKS with the total of 574. A sample of 388 was draw by cluster sampling with probability proportional to size.Self-administered questionaire, which included demograghic information, knowledge of screening and  knowledge prevention of HFMD and  practices during an outbreak of HFMD. SPSS-PC V.15, Epi Info for DOS v6.0 and Epi Info for Windows 2000 were used to compute proportion, 95% confidence interval, median and inter-quartile range.

Results : The overall response rate was 88.1% (342/388). The proportion of caregivers who had enough knowledge in screening, the knowledge in prevention of HFMD was 95 % (95%CI: 91.9,96.9) and 39.8 (95%CI: 34.5,45.2), respectively. Only 3.5% of them knew hand washing with soap before eating and after using toilet, and 6.1% knew exactly that the screening should be done before entering the CCCKS gate. The screening at the gate  in front of the parents was accepted among the experienced caregivers as the most efficient measure in control of the HFMD.  During the outbreak, some caregivers (23.7%) did not reduce the close-contact activities among children, and 19.1% did not report to the public health authorities.

Conclusion : Most caregivers in CCCKS had enough knowledge for HFMD screening but their knowledge in prevention is not enough.  The school gate screening may be the most efficient measure in control of the HFMD and should be investigate further.