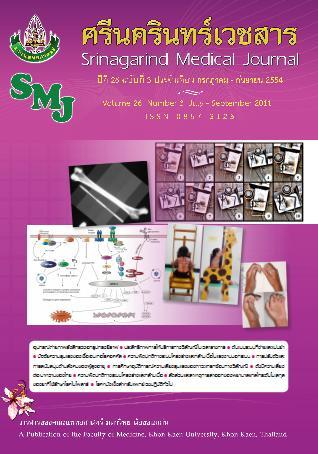 Background and objective : Anesthesia has the potential to induce physiological changes that may lead to morbidity and mortality. As a result, it is commonly regarded as a high-risk activity. The purpose of this study was to study the incidence of critical risks of anesthesia-related complication at Srinagarind Hospital, during the year 2004-2008

Methods: This study analysed the secondary data from the Annual Statistical Service Report and incidence related to anesthesia cases receiving anesthetic service at Srinagarind Hospital, Khon Kaen Province, during January 1, 2004 to December 31, 2008. We collected data from all cases who showed clinical symptoms related to anesthesia and its complications. The data were categorized following the definition described by the Risk Management Committee of the Department of Anesthesiology. After that we recorded the general data of anesthetic service, anesthesia-related complications those need to be reported within 24 hours, the complication data of each items and outcomes after the incidences. All data were recorded by the attended anesthesia personnel or anesthesiologists. All the forms were rechecked and re-verified again before including in the study.

Conclusion: The first three most common incidences of the serious complications were death, cardiac arrest and aspiration. Aspiration and transfusion mismatch trend to be increased. Thus, quality monitoring system was essential and need to be established to look after the patients closely and improved incident reporting.