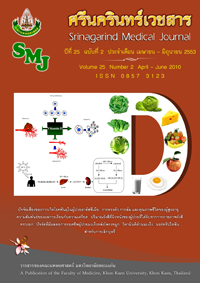 Methods: All of the medical students from Srinakharinwirot University were selected. The design was cross-sectional study. The total subjects were 646; the response rate was 75%. Each participant was evaluated at the end of the second semester during February, 11th 2008 to March, 4th 2008. Each student was asked to answer the questionnaires including Health-Related Self-Reported (HRSR) Scale from Mental Health Department, Ministry of Public Health, Suanprung stress test. Categorical variables were analyzed using the Chi-square test or Fisher exact test. For continuous and binary response variables, we first identified significant explanatory variables through bivariate linear or logistic regressions, respectively. A p-value of less than 0.05 was considered significant.

Conclusion: Poor academic achievement of medical students, correlated to sleep deprivation of less than 6 hours per day and correlated to increase levels of stress.