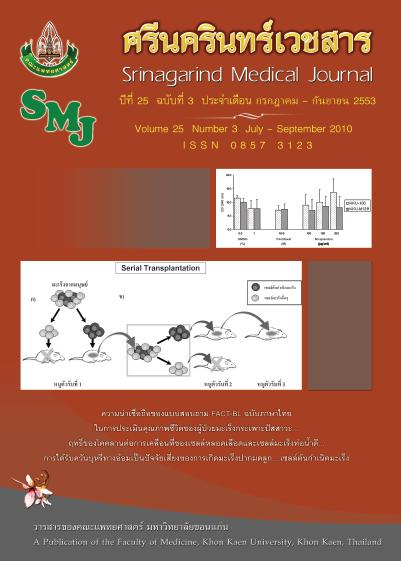 Background and objectives: Mallotus repandus (Euphorbiaceae), a widely distributed plant in South-East Asia, used as medicinal herb in many countries, including Thailand which is commonly used in the treatment of muscle and joint pain. Many active ingredients were found in Mallotus repandus, especially triterpenoids previously reported in various pharmacologic effects including anti-inflammatory and anticancer activities. The objective of this study was to study the potential of the methanol extract of the stem bark of M. repandus on the migration of vascular endothelial cells and cholangiocarcinoma (CCA) cells in comparing with to anti-mitotic drug, paclitaxel (Taxolâ)

Methods: Non-cytotoxic concentrations of M. repandus extract, paclitaxel and vehicle were determined by MTT assay. Co-culture technique was performed to test for anti-migration. The cells were pre-treated with the non-cytotoxic concentrations of paclitaxel, extracts, or vehicle for 30 min before being added to insert (upper chamber), then further incubated for 18 h at 37oC in 5% CO2 incubator. The number of cells migrated to well (lower chamber) were counted under a microscope and the percentage of inhibition was calculated.

Results: The findings revealed that the non-cytotoxic dose of the M. repandus extract could inhibit the migration of both vascular endothelial and CCA cells in dose-dependent manners.

Conclusions: Our results suggested that the methanol extract of the M. repandus stem bark of had anti-tumor metastatic activity.