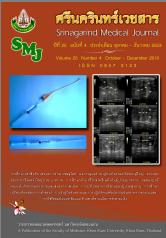 Background and Objective :   Pesticide misuse was not only dangerous to  the user’s health but also harmful to the environment. Additionally, it also harm other people who are not concerning with. This research was conducted in order to examine the hazard perception and preventive performances of the pesticide utilization of the villagers who grow jasmines and gardenias and the one who make garlands.

Methods : The research was  cross-sectional descriptive study and there  were 204 samples selected by simple random sampling. Interview technique with structural questionnaire was used for data collection. Descriptive data analyse were performed with 95% confidence interval.