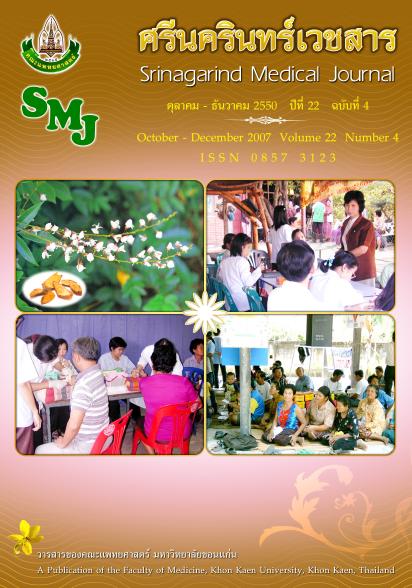 Background: Opisthorchiasis, caused by liver fluke  Opisthorchis viverrini is  endemic  in many countries of the Southeast Asia such as Thailand, Laos PDR, Cambodia and South Vietnam. It is a medically important fluke which causes several hepatobiliary diseases and cholangiocarcinoma.  The tegument of O. viverrini is served as the site for sensory input.  When the metacercaria infects to human, it excysts and migrates into bile ducts by creeping to pass the hepatopancreatic ampulla. The metacercaria might be equipped with some sensory perceptions. The tegumentary papillae may have a role for sensation. No detail of the ultrastructural of the tegumentary papillae of the O. viverrini has been studied.

Study design: Descriptive study based on morphological observation at the ultrastructureral level.

Materials and Methods: O.  viverrini metacercariae obtained from naturally infected cyprinoid fish in endemic area in Khon Kaen were excysted by suspending in 0.1% trypsin solution. The newly excysted metacercariae were processed and observed with a scanning and                  a transmission electron microscopes.

Results: SEM studies of tegumentary papillae identified four types of papillae. Type I was a small conical papilla with long cilium (Fig. 1). Type II possessed short cilium and a larger conical papilla than type I (Fig. 2). Type III was characterized by grouping of 2-3 conical papillae on a dome-shaped base with variable length of the cilia (Fig. 3).  Type IV was non-ciliated conical papilla and found solely on inner lip of the oral and ventral suckers (Fig. 4).

TEM observation revealed two types of tegumantary papillae, ciliated (type A) and non-ciliated (type B) papillae. Only one cilium was found in all ciliated tegumantary papillae. Based on morphology of tegumentary papillae and ultrastructures of the bulbous ending, the ciliated papillae were further divided into three subtypes (A1, A2 and A3).   In type B, there was an elevation of the tegument and the bulbous ending was lack communication with the external surface.

Conclusions: As seen by SEM, there were four types of tegumentary papillae of the excysted O.  viverrini metacercaria. By TEM observation, only two types of tegumentary papillae, uniciliated and non-ciliated were found. Based on internal structures of the bulbous ending, the uniciliated tegumentary  papillae  were further divided into  three subtypes . The evidence of a nerve process leading to the bulbous ending in the TEM study supported that these tegumentary papillae may consider to serve as  a structure for sensory perception. Only the type II papilla in SEM study and uniciliated papilla type A1 in TEM were both located in the outer lip of the oral sucker. Therefore, they might be the same type of papillae.