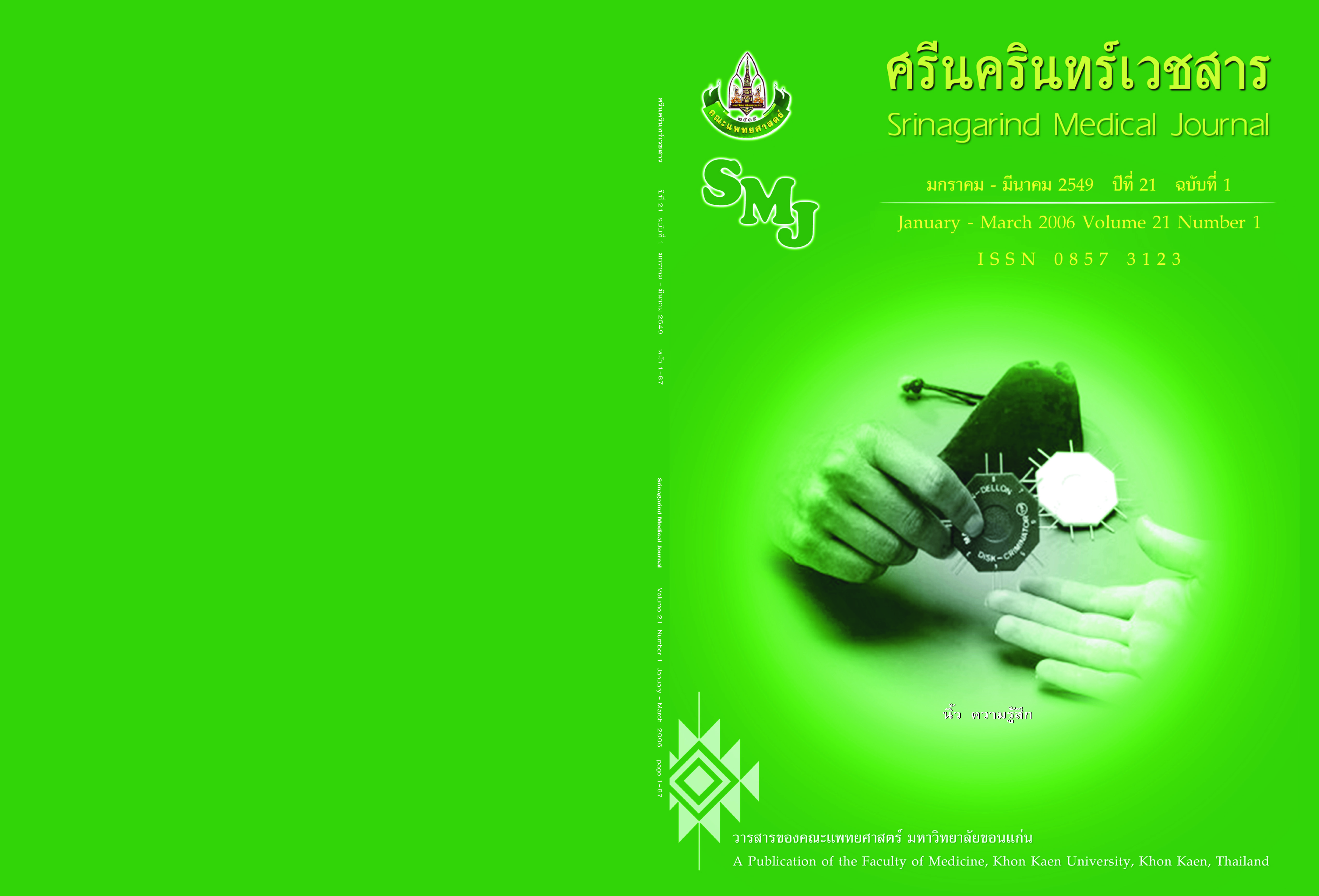 Blackground :  A mother should have contact with, and take care of, her newborn as early as possible.  For this reason, after a cesarean section, care providers are reluctant to give a strong analgesic after the first postoperative day, except oral acetaminophen:  as some analgesics are contraindicated for breastfeeding mothers.  Pain mothers are experiencing the second postoperative day at our hospital has not been graded.

Objective:  To determine the incidence and magnitude of pain the second day after cesarean section.

Setting:  Postpartum Ward at Srinagarind Hospital between August 1 and October 31, 2004.

Method: Interview mothers in the second day after cesarean section.

Measurement:  Pain and suffering scores were evaluated both at rest and during

Results:  One-hundred mothers were interviewed: 78% (95% CI  69 – 86%) had moderate to severe pain and 66% suffering while ambulating.  Before receiving the first oral acetaminophen, 96% had moderate to severe pain and 94% suffering; afterward the pain and suffering were reduced to 43 and 55%, respectively.  Thirty-nine percent of the participants felt that oral acetaminophen provided modest pain relief, while 20% needed more parenteral analgesic in the second day.  All of the mothers were satisfied with the pain relief given even though they still experienced pain.

Conclusion:  The second day after a cesarean section, 78% of women had moderate to severe pain and 66% suffering while ambulating:  39% reported oral acetaminophen produced modest pain relief.  Although all of the mothers were satisfied with the received treatment, alternative methods should be used for greater reduction of pain and suffering.

yes� < S �Q t (86%) of the respondents had an adequate knowledge as determined by an ENT specialist. In part 1.  “ears and ear wax and part 2 ear cleaning and its possible complications”  69 and 64 percent had passing scores.  All of the respondents had poked their ears an average 9 times the previous month:  5 times for cleaning and 3 times to decrease irritation.  Devices introduced into the ear canal included cotton buds (7 times) and fingertips/fingernails (1 time).  Most respondents did their own ears (8 times).  There was a correlation between knowledge in parts I or parts I and II and the avoidance of intrusions into the ear.  However, an increase in the knowledge of part I alone had no significant impact on the number of intrusions into the ear canal.

Conclusion:  Most respondents had an adequate knowledge of the dangers of introducing objects into the ear canal, but still think that it is necessary.  Health education should include an explanation of the mechanism by which the ear rids itself of wax, the possible complications and correct methods for cleaning ears without introducing foreign objects.  People’s belief about the necessity for ear cleaning might then be changed and the behavior altogether reduced.