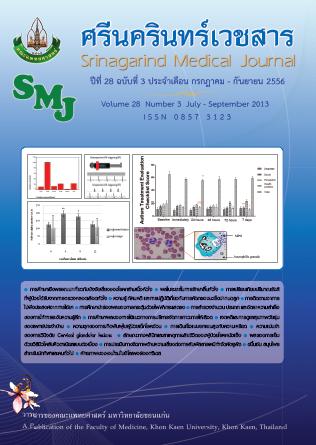 Background and objective : Several countries accept patient self reporting as a part of pharmacovigilance systems because this system can increase reporting rate of adverse drug ractions (ADRs) compared to health professionals. Disease Modifying Antirheumatic Drugs (DMARDs) were used in chronic disease for long-term treatment. These drugs may cause severe ADRs at high frequency. Thus this study was aimed to determine the rate of ADRs reporting of DMARDs reported directly by patients, including factors related to reporting of DMARDs and to evaluate the accuracy of reported symptoms.

Results: The response rate was found in 71.4% (612/857) of total patients. Questionnaires of 77.5% were reported at least one symptom. The most often reported ADRs from azathioprine, chloroquine, hydroxychloroquine, methotrexate and sulfasalazine was blurred vision (40.0%, 50.8%, 48.1%, 34.6% and 29.8%, respectively) while alopecia was the most often reported ADRs related to leflunomide (31.3%). In addition, factors which influenced patients to report at least one symptom were younger age (p<0.001), higher education (p=0.033) and more number of concomitant drugs (p=0.001). The majority of symptoms were classified as being possible (83.1% of all symptoms reported) and patient accuracy of reported symptoms as true ADRs were found in 84.9%.

Conclusion: The ADRs reporting rate of DMARDs from patients was detected at high frequency and most of them are known ADRs. Therefore, patient self-reporting ADRs may be the role of monitoring ADRs in patients with chronic disease using the long-term drugs.