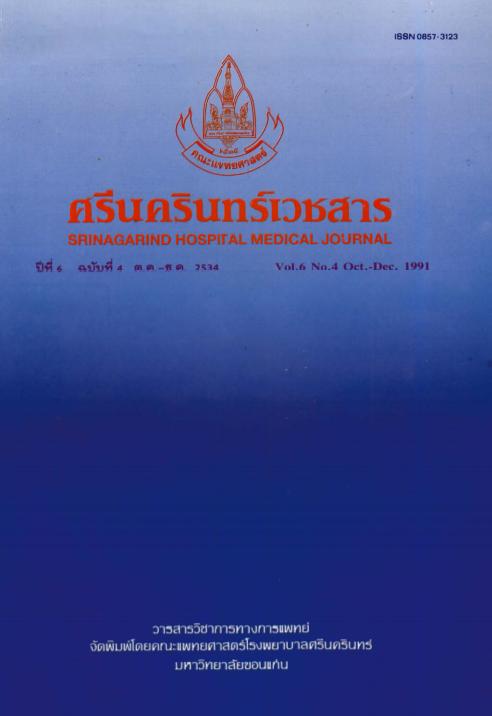 The types of bacteria in the infectious root canals preoperation and after successive irrigation and treatment were studied in order to compare the results of treatment using irrigation alone with using irrigation and intracanal medication.  Moreover, the sensitivity patterns of treatment resistant bacteria and the most commonly found bacteria were also performed.  The study population were the patients who treated with endodontically in the school of Dentistry, Khon Kaen University and in the centrnal clinical dentistry, Srinagarind hospital.

The results showed that mixed bacteria were normally found in root canals but alpha-hemolytic streptococcus was found in the high frequency.  Irrigation with 5.25% NaOCI gave higher significant efficiency than 0.5% NaOCI + 3% H2O2 whereas irrigation with the normal saline solution could not significantly reduce the number of microorganisms.  The cmbination of irrigation and intracanal medication could significantly eliminate microorganisms more rapidly than irrigation alone.  In addition the anaerobic bacteria were eliminated in only one treatment whereas all bacteria were usually eliminated after the third treatment.  However, Strep. fecalis and Ps. Aeruginosa were still found to be resistant to the above treatments and the sensitivity patterns showed that Strep. fecalis was sensitive to ampicillin and chloramphenicol whereas Ps. aeruginosa was sensitive to gentamycin and amikacin.  The most commonly found bacteria in root canals, Strep. viridans, was sensitive to ampicillin, erythromycin and chloramphenicol.  In conclusion, the treatment of root canals using 5.25% NaOCI as an irrigant, the dentist should perform at least 2 consecutive irrigation before root canal obturation.  In case of low immunity, 5.25% NaOCI irrigation combined with medication is probably a treatment of choice.