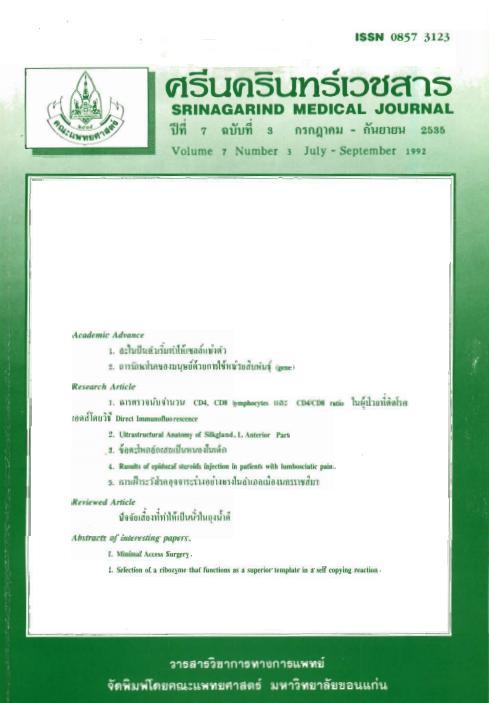 Fourty patients with recalcitrant lumbosciatic pain were treated by epidural steroid injection at Srinagarind hospital, and a private hospital between January 1988 to April 1990, to study the efficacy of epidural steroid injection. the average age was 52.2 years (24.62 years).  All patients were injected with 2 cc. Of methylprednisolone (depo-medrol 40 mg/cc.) plus 3 cc. Of 1% lidocaine at weekly interval for 3 weeks.  The patients were devided into 2 groups; group I includes those patients who had lumbosciatic pain less than 3 mounths, group II more than 3 months.  In this study there were 11 patients in group I and 29 in group II.  The results at one week after completion of the injections were good in both groups (81.81%, 72.42%), at 3 weeks (after completion of the injection) were quite good 63.63% in group I and 58.62% in group II and at 6 weeks after completion of the injection the result were good < 36.36%.  In this study, it appears that the lumbosciatic pain may receive temporary relief with steroid injection especially in short term (<6  weeks) but no value in long term treatment.