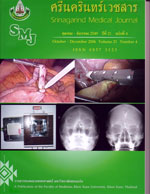 Background Plain  films from the Water’s view and the Caldwell’ view   in  an erect  projection  can  help  physicians see the pathology of  sinusitis through the differences between clear fluid  and air  level .However, the Bucky stand which is a common device used in most of the community hospital in Thailand cannot  take two views in  one  film.( Although some supporting devices can do this, their limitation is suitable only for a supine  projection. Thus, a radiographer usually uses two films for this purpose with causing unclear image. This leads to more cost, more radiation dose. As a result, an innovative device is needed to solve these problems.

Objective To invent an accessory device for paranasal sinuses radiography in order to be equipped with the Bucky stand and  able to take two radiograph in an erect projection in one film. And  also  it can help  to reduce the field size of radiation exposure.

Material & Method : The following three procedures are employed. First, planning and Designing  a device.  The second, Inventing a device.  Finally, testing its effectiveness in these aspects:  taking two radiographs  in  one  film, comparing the outline sharpness with and without the device, and comparing dose area product with and without the device.

Result : The findings reveal  that the device can be conveniently fitted to the Bucky stand.   It can  be  use  for erect projection  and provides better sharpness outline images than those without this device. This  device  can  also  help reduce dose area product by 70.9% comparing with the two –film.

This device can be easily attached to the Bucky stand facilitating needed  sinus  radiography in the erect  projection. It is very handy as it is easy to fixed and removed. It  supports  taking the  Water’s  view  and  Caldwell’s  view in  one film.  Moreover, quality of the radiographic  image has greatly been  improved by the device.  By  DAP meter  measurement, through this device, the radiation  dose  significantly decreases by  70.9 % compared with two-view method.