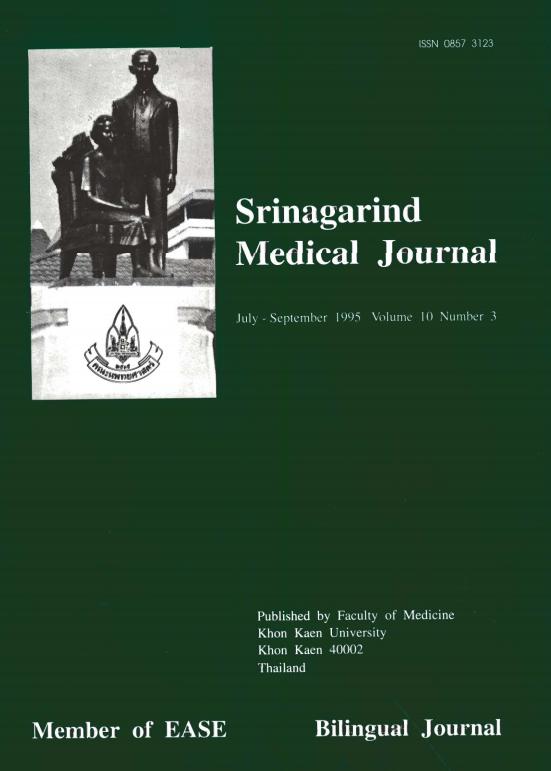 The recent epidemic of Cholera Strain Vibrio cholera 0139 were occurred in India and Bengal Surveillance for Vibrio cholera 0139 in Srinagarind Hospital has been done from 11th March 1994 to 5th August, 1994.  One hundred and five patients were infected by this organism.

There were three outbreaks of Vibrio cholera 0139 in Srinagarind Hospital.  In the first outbreak from 11-13th March 1994 there were 18 cases of infected patients in the second one in 8-13 June 1994 there were 36 cases and the last one was the 28th July to 5th August, 11 cases were found in only one case of breast feeding was the infant reported to be infected with this organism.  Most of the cases occurred in Amphur Muang, Khonkaen, percentage with a ratio of man : woman, 2:1, and average age was 41 years old (4 days-82 years).  The susceptibility of the organism to Tetracycline, Gentamicin, Nalidixic acid, Neomycin, Ampicillin was good, but there was moderate sensitivity to Chloramphenicol, no response to colistin and Cotrimoxazole

Many control programs were done in these outbreaks such as hygeine education, surveillance for infection and the personnel who were carriers and cooked food.  The source of organism in Khon Kaen University was detected in rectal swab C/S of 253 personnel but only 7 cases infection were found and 318 specimens of swab C/S of used water food and vegatables were taken, and 4 specimens were positive for this organism.

The implementations for controling of this outbreak were the rapidly indentify and treat, mass media for the communication, including, personal hygiene the used of chlorination etc. the case.