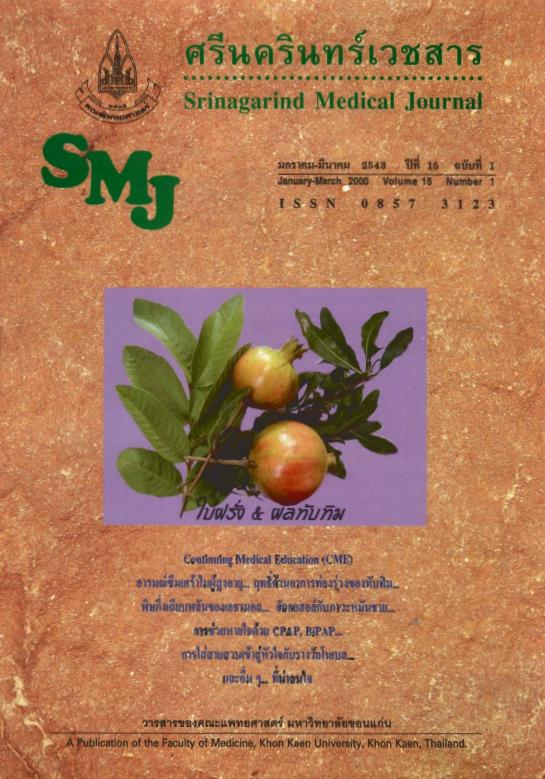 Background : Diarrheal diseases are caused by several agents including infections or chemical agents that induced irritation of the gut wall, decrease electrolyte and water absorption or increase secretion. Much of interest is now focused on indigenous plants as herbal medicine. Our work will be on plants with antidiarrheal actions.

Objective : To study of the antidiarrheal effects and the possible mechanism of actions of guava leaf and pomegranate fruit bark extracts in experimental animals.

Subjects : Swiss albino mice were used in the in vivo studies. Animals were divided into control group (20 animals), and treatment (80 animals). They were given with extracts at two doses levels (high and low), then animals were induced to develop diarrhea with several agents. For in vitro studies, isolated Guinea pig ileum segments were used. Ileum was induced to contract with electrical stimuli or chemical spasmogens Ach. or BaCl2

Measurement : Number of defecation, texture of stool, and time to onset of diarrhea were recorded. Amplitude of contraction was recorded for in vitro studies.

Results : In this study, the extracts of guava leaf and pomegranate fruit bark, at either 0.5 or 1 g/kg body weight, were tested for antidiarrheal effects. In in vivo experiments, mice were treated with either 0.5 ml of castor oil or 2 g/kg body weight of MgSO4 in order to induce loosening of stool. It was found that both extracts, at concentration tested, could reduce the loosening of stool induced by either castor oil or MgSO4 significantly. With isolated guinea pig ileum, both extracts also inhibited the contraction induced by either acetylcholine, BaCl2 or electrical stimulation at frequency 0.2 and 10 HZ.

Conclusion : The results suggest that the extracts might act through cholinergic or non-cholinergic nerve in ileum wall and/or directly on ileum smooth muscles.