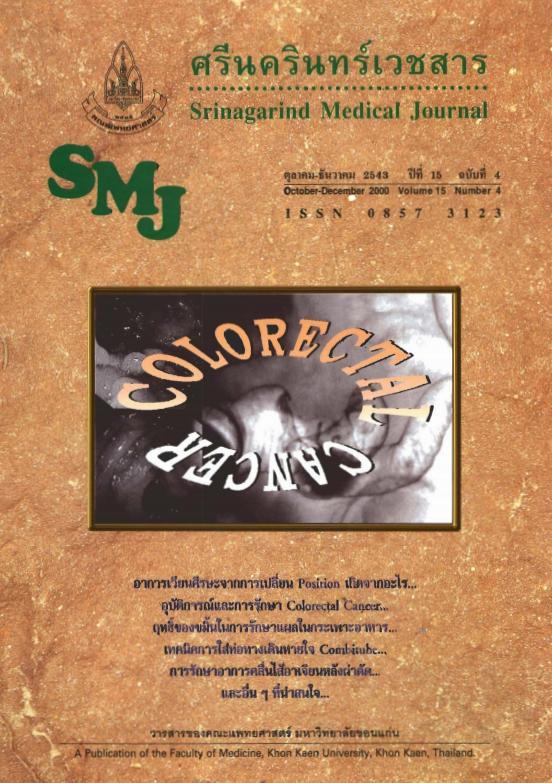 Background: Dry powdered rhizome of Curcuma longa, turmeric or Kha-min (in Thai word), was claimed to have antiulcerogenic effect. However, the scientific evidences showing the effectiveness of turmeric in the treatment of gastric ulcer are still controversy. In order to elucidate the antipeptic activity of turmeric, therefore, we investigated the antiulcerogenic effect of turmeric powder and curcuminoid against indomethacin and hypothermic-restraint stress induced gastric ulcer in rats.

Methods: Male Wistar rats weighing 180-220 g were used. Gastric lesion was induced by administration of indomethacin 12 mg kg-1 subcutaneously  and also by hypothermic-restraint stress. In the study of protective effect, the rats were pretreated with turmeric suspension in 10% propylene glycol orally at doses of 0.25, 0.5 or 0.75 g kg-1 for 3 days.

In the investigation of healing effect, the gastric ulcer was induced and followed by administration of turmeric suspension or curcuminoid. Total length of gastric lesion was measured under the stereomicroscope and used as gastric ulcer indicator. Determinations of soluble and insoluble gastric mucus were performed by spectrophotometry method.

Results: Turmeric at dose of 0.5 g kg-1 was not only significantly effective in protecting but also enhancing healing of gastric ulcer induced by indomethacin 12 mg kg-1 . Interestingly, turmeric at 0.75 g kg-1 had no antiulcerative effect, and showed a tendency to increase the severity of lesion as compared to control. The curcuminoid 5 mg kg-1 did not show any healing effect in indomethacin-induced ulcer but could significantly inhibit the gastric secretion of soluble mucus at 3.5 hr after curcuminoid administration.

Conclusions: It may be concluded that Curcuma longa is effective in protecting indomethacin induced gastric ulcer and enhancing the healing of ulcer. This effect is dose dependent, and can be achieved only with proper dose.