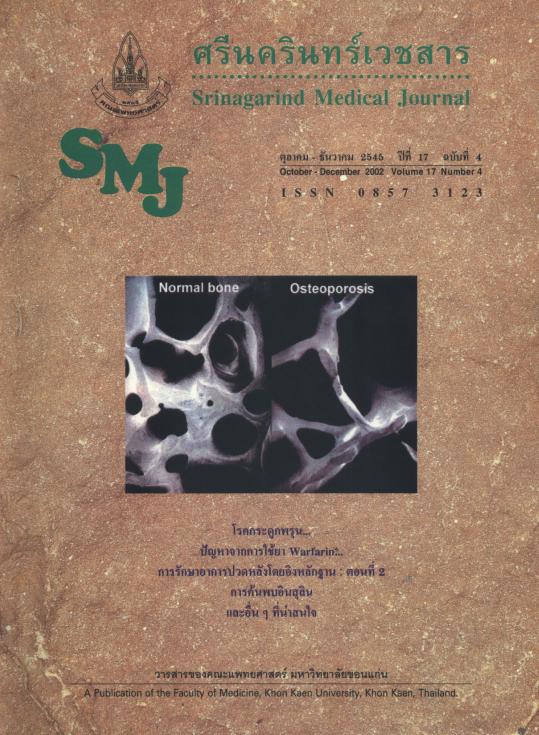 Background : Ceftazidime is a third generation cephalosporin that has been commercially available through several manufacturers and distributors in Thailand because of its widely clinical use. However, there is no bioequivalent study of this drug in Thais.  The present study was conducted to compare the in vivo bioequivalent of ceftazidime obtained from an original (reference), and a local (tested) manufacturer in healthy Thai volunteers.

Objective: To determine if two ceftazidime preparations (FortumÒ and ForzidÒ) of different manufacturers are bioequivalent when administered intramuscularly.

Methods and Interventions: Ceftazidime 1 g was administered intramuscularly to subjects. Blood samples were collected at predetermined intervals and assayed for ceftazidime concentration with HPLC. Pharmacokinetic parameters were calculated from the observed plasma-concentration time profiles. Maximum plasma concentration (Cmax), time to peak concentration (Tmax), areas under the concentration-time curve from 0 to 12 h (AUC0-12) and 0 to infinity (AUC0-µ) were the primary parameters considered in the determination of bioequivalence.

Results: The two ceftazidime preparations were generally well tolerated by all volunteers. Administration of both preparations resulted in similar mean values for every pharmacokinetic parameters. Statistical analysis revealed no significant difference between the two preparations in any parameter, indicating that the two preparations are statistically bioequivalent (p<0.05). The 90% confident interval (CI) for the ratio of the means for the Cmax (0.9281-1.1272) and AUC0-¥ (0.9311-1.0184), are within the Food and Drug Administration Guideline range of bioequivalence (0.80 to 1.25).