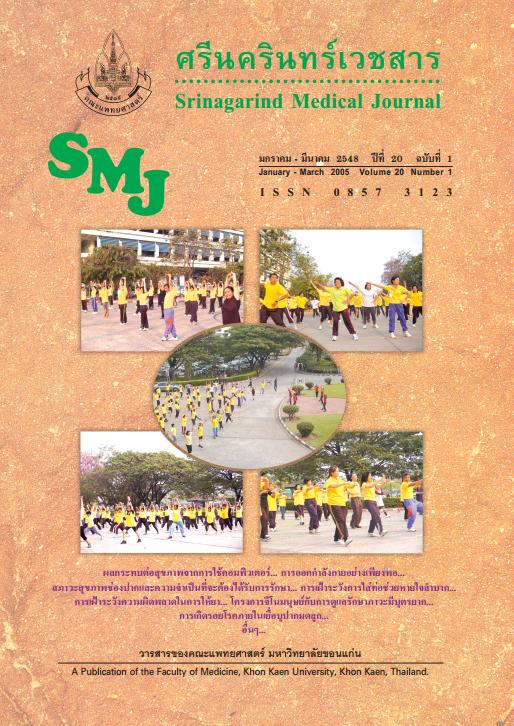 Objective: To identify the incidence and causes of drug error during anesthesia .

Methods: Our research was a part of a multi-center study conducted by the Thai Royal College of Anesthesiologists aimed at surveillance of anesthetic related complications in Thailand in 2003.  We collected the data from all the cases receiving anesthesia service at Srinagarind Hospital between January 1 and December 31, 2003, in order to enumerate drug errors during anesthesia and to determine the cause of the error in order to improve the quality of service.  Drug error was reported by anesthesia personnel and attenuated anesthesiologists.  A drug administration error is defined as, “a mistake in the administration of a drug”.  Errors include:  the incorrect medication, the incorrect route, the incorrect time, drug overdose, wrong patient, omitted medication and medications given but no record of the drug. We had record about patient’s sex, age and ASA physical status, type of operation, place and time of event, type of the mistake and the outcome.

Results: Drug error during anesthesia incidence was 12.26:10,000 (based on 10,607 patients).  While the highest rate occurred in the neonatal patient group (newborns to 1 month of age), most drug errors occurred during daytime and among patients with an ASA status of between I and II.  Only minor physiological disturbances occurred in most patients.  The most common causes of errors was the lack of double checking before administration and miscommunication among members of the anesthetic team.

Conclusion:  The medication error rate was relatively low and primarily due to inattention. The anesthetic team should take steps to ensure double-checking before administering medications.