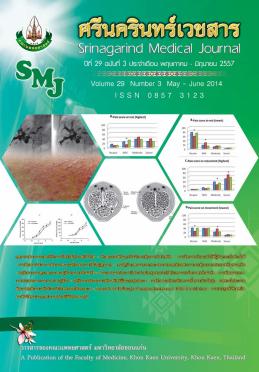 Background and objective : Asthma is a chronic disease. There are no details of occupational data on asthmatic patients. This study aimed to describe occupations and stimulating agents in asthmatic patients who attended the Asthma Clinic, Srinagarind Hospital, Khon Kaen, Thailand.

Methods : A descriptive study was performed in Srinagarind Hospital, Faculty of Medicine, Khon Kaen, Thailand. One hundred and five asthmatics patients aged between 18 and 70, diagnosed between 2010 and 2011, were selected by systematic sampling. Data collection was performed by interviewing cases at the Asthma Clinic diagnosed between January 1, 2010 and December 31, 2011. Statistical analyses was performed using SPSS V.19.0 for Windows, including: frequency and percentages.

Results: Of 105 cases, the median age was 54 years of age (IQR=13). Most were female (76.2%). Asthmatic cases included ever-smoked (13.3%) and had a history of atopy (67.6%) or a family history of asthma (23.8%). Most subjects developed symptoms of asthma after working in at risk environments (87.6%).Occupations were classified using the 2008 International Standard Classification of Occupation (ISCO 2008). The two most common occupations among asthmatic cases were ISCO Group 2 professionals (39.0%) and ISCO Group 6 skilled agricultural, forestry and fishery workers (37.1%). The most common agents found were low molecular weight molecules (63.8%) and inorganic dust (66.8%).