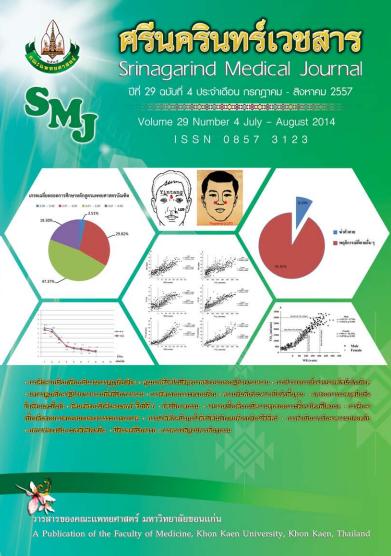 Background and objective: According to Criminal Procedure Law, unnatural deaths must be investigated by forensic pathologists and police officers. Unnatural deaths in Muang district, Khon Kaen province and those referred cases from other hospitals in the northeastern region  were autopsied in Srinagarind hospital,  Faculty of Medicine Khon Kaen University. The objective of this study is  to estimate the 5-year incidence of suicides in Srinagarind hospital, Khon Kaen province.

Methods: The death certificate and autopsy reports of suicides at the department of Forensic Medicine, Faculty of Medicine, Khon Kaen University during  January 2006 to 31 December 2010 were reviewed. The data were  analysed by descriptive statistics and  based on their sex, age, methods of choice and manner of death.

Conclusion: The number of suicidal victims were small compared to other manner of death   (homicide, accident). Hanging was the most common method of choice for suicide.The most common age group was 35-44 years. Poisoning and wound were the next most common manner of  death, which most occurred  in October  and March. Children under 15 years  didn’ t commit suicide.