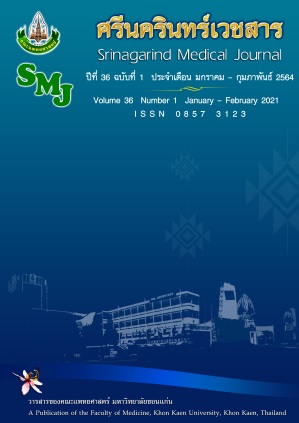 Background and objectives: Digital radiography is a common diagnostic practice and it has been a significant increase in the number of x-ray examinations. Patients were frequently exposed to radiation may consider increasing the risk of exposure to radiation. The purpose of this study was set up to evaluate the entrance skin dose (ESD) in common digital radiography in Srinagarind hospital, faculty of medicine, Khon Kaen university and compared to ESD with national and international diagnostic reference level (DRL) including study of parameters which effect the ESD.

Material and method: The retrospective study was conducted from January to May 2019 by using picture achieving communication systems (PACS). The digital radiographic parameters from total 1,010 patients from 12 examinations including chest, cervical spine, thoracic spine and lumbar spine, skull in anteroposterior/posteroanterior (AP/PA) view and lateral view, abdomen and pelvis in AP view were recorded. The ESD was calculated using the specific formula. All data were analyzed using descriptive analysis and the correlation of digital radiographic parameters and ESD was also analyzed.

Conclusion: This study provided the median ESD in Srinagarind hospital and already compared with national DRL, international IAEA DRL, Japanese DRL and UK DRL. When the median ESD was higher than national and international DRL, technologist and team member could investigate and determine the cause of problem. The quality assurance program and efficiency of X-ray machine firstly check to ensure the good performance of the machine and radiation output and then the protocol and exposure technique were also revised. Further step, dose optimization is required to reduce the patient dose and limit the stochastic effect risk.