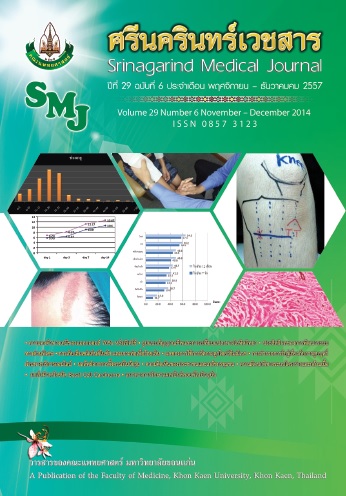 Background and Objectives: The onset of Dengue fever is associated with changes in vital signs and hematology in patients. The World Health Organization has recommended using this information to classify and treat Dengue patients in different stages of the disease. Patients admitted for treatment of Dengue fever at Srinagarind Hospital may exhibit different changes in vital signs and hematology from those described by the World Health Organization. This study aimed to evaluate such changes in patients admitted in Srinagarind Hospital who tested positive for the Dengue NS1 antigen. The data from this study will be useful to physicians who treat Dengue patients, and will help in adapting Dengue treatment to the guidelines set by the World Health Organization.

Methods: Data was collected in the Emergency Department at Srinagarind Hospital, Faculty of Medicine, Khon Kaen University, between January 1, 2013 and December 31, 2013 from patients who had been diagnosed by ICD-10 operating system, data management system (Accident and Emergency Information System: AEIS®). Patients were divided into three groups according to symptoms: those with an undifferentiated fever, those with dengue fever and those with dengue hemorrhagic fever. For each patient, the NS1 antigen test results, body temperature and concentration of red blood cell and platelet were recorded.

Conclusion: The pattern of changes we observed regarding the concentration of red blood cells and platelets of Dengue patients was slower than those described by the World Health Organization.