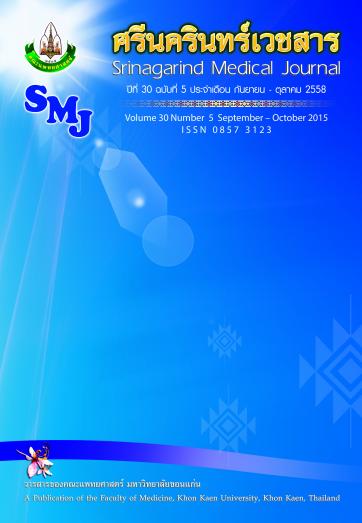 Background and objective : Tuberculosis (TB) is one of the most prominent infectious diseases. The genetic polymorphism or single nucleotide polymorphisms (SNPs) for prediction of susceptibility to Mycobacterium tuberculosis (Mtb) infection and TB development is still unclear. Chemokine (C-X-C motif) ligand 9 (CXCL9) plays an important role in recruiting immune cells during the early event of Mtb infection. The SNPs of CXCL9 gene may contribute to the susceptibility of Mtb infection. However, the association between the SNPs of this gene and the susceptibility to TB has yet been investigated. This study aim to determine the association between the SNPs of CXCL9 (rs2276886) and TB susceptibility among the population of Northeast Thailand.

Population and Samples: The enrolled subjects, according to the inclusion criteria, comprised of 49 active pulmonary TB (ATB) patients and 40 healthy controls (HC) with no known risk to TB exposure who received healthcare services at Srinagarind Hospital, Khon Kaen.

Measurement: The questionnaires were collected. Genomic DNA from venous blood of each group of participant was extracted.  The tetra-primer ARMS-PCR method was used to define the CXCL9 (rs2276886) SNPs in individuals. Genotype and allele between ATB and HC were analyzed and compared.

Conclusion: The association between the CXCL9 (rs2276886) polymorphisms and TB susceptibility in the population of Northeast Thailand was not supported by the result in this study. Other genetic variations within this gene or other chemokine related genes might be further investigated for clearer information.