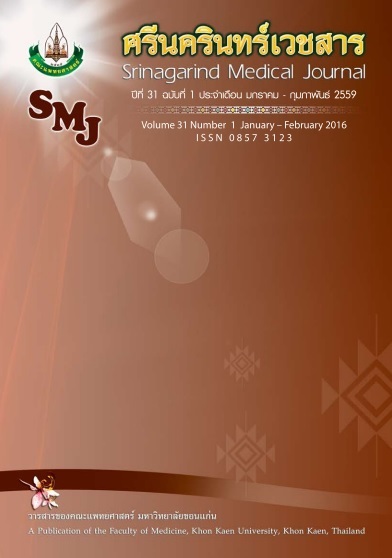 Background and Objectives  : There are three neighboring provinces located near the borderline including Ubon Ratchathani, Sri-Sa-Ket, and Umnachareon. They have been reported numbers of patients exposed to insect pesticides between 3.13 and 6.26  per 100,000 population interpreted as ‘moderate’ numbers that need to be monitored closely.  Therefore, researchers aim to survey farmers’ health knowledge in growing gardening vegetables and using insect pesticides in three north-eastern provinces, Thailand.

Methods  : It is a survey research.  Risk areas included, Kum-Num-Sap (Ubon Ratchathani), Nong-Mook (Ubon Ratchathani), Cha-lan (Umnartchareon), and Phon-Muang (Sri-Sa-Ket) villages.  The researchers went through the questionnaire items and the farmers gave the answers.  Then, all data were evaluated via descriptive statistics (e.g., frequency, percentage, mean, SD).  For mean score comparisons of self practice and preventing behavior from insect pesticides in each area, have been analyzed via One way-ANOVA and Bonferroni.

Results   : Totally, there were 42 farmers enrolled in this study.  An average age of the villagers in each area was more than 44 years of age, graduated from primary schools.  They have been farmers between 6 and 10 years.  Also, most farmers exposed to insect pesticides mainly during harvesting process (90%).  Noticeably, most farmers used self-protecting equipments during spraying insect pesticides (75%).  Burning and landfilling are the most common destroying methods of insect pesticide containers.  While the farmers were having ‘very good’ perception regarding insect pesticide preventing behaviors ( = 2.9 ± S.D. 0.2), they seemed to have ‘moderate’ risk of their health issues.   Mean scores related to self practice and preventing behavior from insect pesticides of Umnartchareon were significantly different from Ubon Ratchathani farmers (p =0.011, 0.019, consecutively)