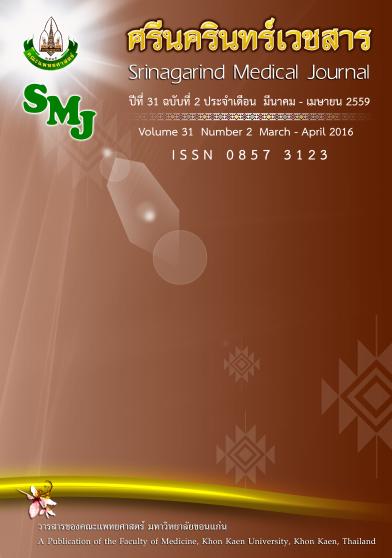 Background and Objective :  Pap smear can detect abnormalities of cervical cells in the early stage or onset of symptoms. From the survey in 2010 to 2014, found Akha hilltribe women who live in Huaychompu Subdistrict Muang District Chiangrai Province did received cervical cancer screening only 16.2 %, which is lower than indicators of National Cancer Institute that defined by at least 70% in 5 years.

Methods:   Analytical Case-Control study. Population and samples were Akha hilltribe women age 30 to 60 years old who had list in house registration and residence in Huaychompu Subdistrict, Muang District, Chiangrai Province. The cases were 130 women who never had cervical cancer screening during the period 1st October 2009 to 30th September 2014. The controls were 130 women who did received cervical cancer screening during the same period.

Conclusion :  In the light of research showed that the factors associated with not receiving cervical cancer screening among the Akha hilltribe women in Muang District, Chiangrai Province were elementary educated, secondary educated and high school educated and those whose first experience of sexual intercourse was at or older than 18 years of age and less than four pregnancies and low perceived susceptibility for cervical cancer women and no health insurance women.