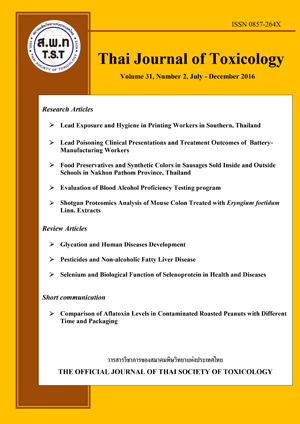 Nitrate and nitrite are permitted to use in sausages as preservative and color retention agent. Synthetic colors and other food preservatives which are not permitted to be used in sausages are also found. This study aimed to evaluate the use of preservatives and synthetic colors in sausages sold inside and outside schools in Nakhon Pathom province. The samples were collected from food shops inside and outside the schools. The levels of nitrite, nitrate, sorbic acid, benzoic acid and synthetic colors were analyzed. Health risk of each food additive from sausage consumption in students was assessed by comparing the exposure with the acceptable daily intake (ADI). Nitrite, nitrate, sorbic acid and benzoic acid were found in 100%, 85%, 59% and 49% of 93 sausage samples, respectively. Synthetic food colors including erythrosine and ponceau 4 R were found in 4 and 1% of the total samples, respectively. Unacceptable risk related to health was found in children who consume high amount of sausage containing high nitrite levels. High sausage intake at 97.5th percentile (P 97.5) with high nitrite concentration (P 97.5 = 55.53 mg/kg) provided the nitrite exposure exceeded the ADI in primary and secondary school children at 206% and 145% of the ADI, respectively. The exposures to nitrate, sorbic acid, benzoic acid, erythrosine and ponceau 4 R at mean and high intakes of sausages were lower than the ADI. Thus, children should avoid regular consumption of a large amount of sausage because nitrite intake will be higher than the health based guidance value (ADI).