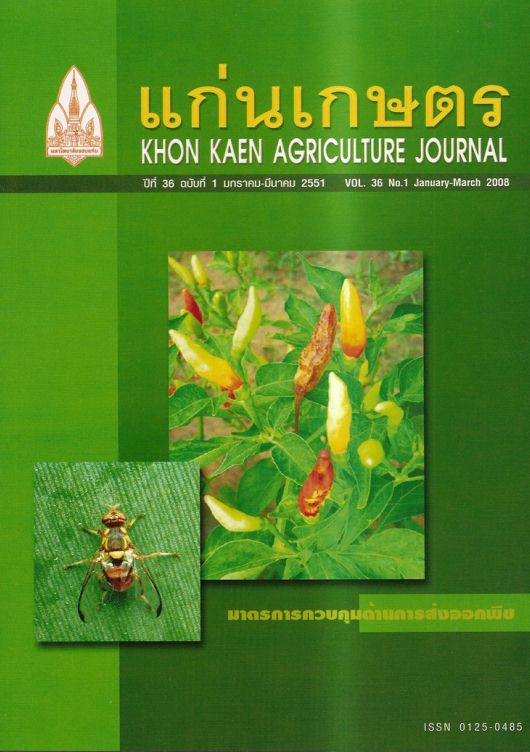 Previous research on wild food species in Northeast Thailand has focused mostly on their use by ruralhouseholds, both as a source of food for their own consumption and as products that they collect to sell to gain cashincome. Research about the marketing of wild products is limited, however, and studies of wild food species in urbanmarkets are especially sparse. To help fill this information gap, this paper presents the results of an investigation ofthe economic value of all edible wild and semi-domesticated species of plants, fungi, and animals sold in urbanmarkets in Khon Kaen municipality. This paper reports findings of a survey that was conducted during 2006 in BangLam Phu market, which is the central fresh market in Khon Kaen municipality, the capital of Khon Kaen province, inthe Northeastern region of Thailand. The survey included identification of all species of plants, fungi, and animalsbeing sold and recording of the quantities and prices of each species. The average daily value of sales for all 81species of edible wild and semi-domesticated products in the dry season was 32,702 baht/day (US$ 919), which canbe extrapolated to a total sales values for the whole 206 day long dry season of 6.7 million baht (US$ 189,231).The comparable figures for the 159 day long rainy season are 45,530 baht/day (US$ 1,279) for a seasonal total of7.2 million baht (US$ 203,350). When these sample data are extrapolated to the whole year, the estimated totalannual sales value of wild and semi-domesticated products in 2006 is almost 14 million baht (US$ 392,581).Although this is only an order-of-magnitude estimate, it suggests that wild and semi-domesticated foods haveconsiderable economic significance in the urban context in Northeast Thailand. Of the 81 species sold in the market,plant products had the highest total annual value (7.7 million baht), followed by animals (5.7 million baht) and fungi(508,000 baht). Insects (2.3 million baht), crustaceans (1.6 million baht), and amphibians (1.5 million baht) accountedfor most of the value of animal products sold over the course of the year. The number of species available in themarket is affected by the seasons. In the rainy season, 44 species of plants were on sale with an average daily salesvalue of 32,007 baht. In the dry season, the number of species decreased to 35 and the average daily sales valuedeclined to only 12,674 baht. Fungi were found only in the rainy season. Because all six species are completely wildthey are now rare products with an average daily value of sales of only 3,200 baht. Fourteen species of animals wereavailable in the dry season and 15 species in the rainy season but their average daily value in the dry season (20,028baht) was considerably greater than in the rainy season (10,324 baht). Prices vary from a few baht per kilogram (forcommon plants like phak bung na) to more than one hundred baht per kilogram (some rare animals). There are alsomajor differences in the total quantities of different species sold in the market ranging from only a few kilograms peryear for some animal species to nearly 100,000 kilograms for the most abundant plant species. In general, thereappears to be a negative correlation between sales prices (baht/kilogram) and total quantities of these products, sothat those species in the most abundant supply fetch the lowest prices. Heavy urban demand for these products mayalso be a force encouraging rural people to try to domesticate high value species that are becoming increasinglyrare and difficult to find in the wild. This study’s finding of the high economic value of wild food products sold in anurban market suggests that more investment in research on domestication of these species may be justified.